From the explosive opening percussion of the first song KCB to the transcendent melodies of Accepting Hardships as the Pathway to Peace, the Clibber Jones Ensemble come out swinging on the “3+3 EP” with thoughtful music that is exciting to listen to.

On the first track, KCB, the band is fueled with a passion reminiscent of the aftermath of Carnival in Rio or a night in New Orleans. The repetitive rhythmic lines are minimal at times but harkens to the traditions of composers like Karlheinz Stockhausen and Terry Riley, but with a punk rock edge. The bass playing reminds me of David Sims from the Jesus Lizard and it is so refreshing to hear vibraphone and flute laying down melodies.

The heavy opening of the next song, 1997, reminds me of DC hardcore; very driving, very rhythmic; hypnotic in the best sense. The guitar playing adds a nice sonic wash that would make Greg Ginn proud. The expressive entrance of the saxophone hits me in the stomach every time and with the support of the keyboards is very moving. In addition, the sax spirals out to a playful melody mindful of Charlie Parker; Salt Peanuts!

The interlude in the middle of 1997 sounds likes the Clibber Jones Ensemble is searching for something, creating a musical tower of Babel that is cerebral but entertaining. It is always a pleasure to hear music that’s written in time signatures other than 4/4; 1997 being predominantly in 6/8. 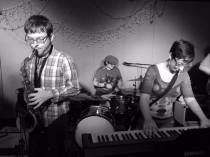 The third track, Accepting Hardships as the Pathway to Peace, has a lighter feel with an almost 80’s introduction courtesy of some crafty guitar playing. The saxophone starts out a little lighthearted playing with the rhythm once again, but soon blossoms into a beautiful solo that is played on soprano saxophone and very reminiscent of late John Coltrane. Two thirds into the track the song becomes very uplifting and melodic; just transcendent followed by a minimalistic breakdown that sets up a screaming end once again recalling Coltrane from the One Up One Down era.

For the final three tracks, the Clibber Jones Ensemble has friends remix their songs to great effect. The KCB remix is lovely and clear, looping the soprano sax and yielding a drum and bass trip-hop feel. The track sounds like there’s a record spinning in the background as if there is a DJ remixing the song on the fly.

The next song is a remix of the driving 1997. The remix starts off really percussive and upbeat, almost like something Outkast might do. I like that it starts with the saxophone first melodically then the guitar saving the bass to slam into the song while still maintaining the hard driving integrity of the line. This is arrangement would sound good performed by the ensemble proper. This remix almost has a kind of twisted eastern European puppet show on the square in the wrong part of town at the wrong hour of night feel.

The final track is the remix for Accepting Hardships as the Pathway to Peace. I love the straight forward driving beats with the descending melodic lines; this is a really great remix and I would love hear Clibber pull it off. The middle section almost reminds me a little of the band MGMT with the octaves in the keyboard and using that wonderful sax solo is a nice touch. This morning when we were eating breakfast and listening to the “3+3 EP”, my children had to get up and dance to this remix. I can really see the Clibbers in their green kicks, some funky shirts, and cool hats dancing to this one. I want to see the ensemble perform an interpretive dance for this remix at one of the shows.

All in all, the Clibber Jones Ensemble “3+3 EP” is a great release!